A multifaceted research into the design, construction and yield of a bifacial solar noise barrier.

This project was executed between 1 June 2014 and 30 June 2020 by Rijkswaterstaat and TNO with a subsidy from the European Commission within the LIFE + programme.

The Netherlands and Europe are facing a tremendous task to halt the emission of greenhouse gases. The generation of sustainable solar energy is part of the solution. For large scale generation of solar energy we need a lot of surface for placing solar panels, which is scarce in densely populated areas. That is why the multiple use of surface area for the generation of solar energy is an attractive option. A good example of double use of space is the installation of solar panels on roofs, such as on homes, but also on large business premises or farm sheds. The transport infrastructure also offers opportunities for double use of space. Here one can think of roadsides, highway intersections, in the road surface itself, but also noise barriers. In the Netherlands, there is approximately 1,500 km of noise barriers installed along roads, which could be used to generate solar energy. The potential in Europe is a obviously much larger. Also noise barriers along railway lines can be considered.

This is not the first project in the Netherlands that combines solar panels and noise barriers, but in previous projects standard solar panels were placed on existing noise barriers. New in the Solar Highways project is that we use fully integrated solar panels, that are part of the construction. In this way, the solar panels have a double function: they both block noise and generate sustainable electricity.

The contract for the construction of the noise barrier was granted in a tendering procedure. By using special selection criteria, companies were challenged to submit an innovative design. Naturally the price also played an important role in the selection process. After the assessment of the submitted proposals, the assignment was awarded to Heijmans Infra B.V. In their submitted proposal, Heijmans paid attention to various innovative aspects. A smart design for placement of the solar modules minimized the influence of shadow. Combined with smart electronics, this also contributed to the electrical safety of the design.

At the beginning of 2018, the old noise barrier in Uden was removed, to be reused elsewhere. In the summer of that year the foundation was placed and in the autumn the new noise barrier was built. The first sustainable electricity was produced at the end of November. On 18 February 2019, the installation was officially commissioned by the Minister of Infrastructure and Water Management. 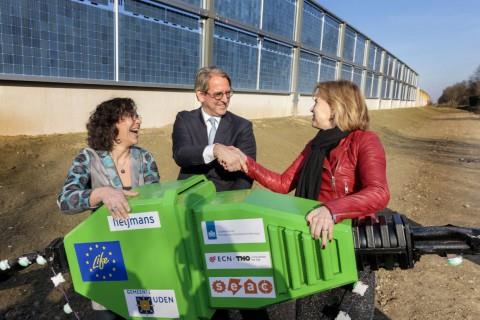 Unlike most solar panels, the panels in this installation stand upright. Since the solar cells are double-sided, they are oriented to the east and west. This means that when the sun rises in the east, the panels are already in full sunshine. During the day, the sun slowly moves to the west. Around noon the sun shines parallel to the barrier and not much direct light reaches either side. In the evening, at sunset, the sun shines straight on the west side of the barrier again. The graph above shows what this means in terms of irradiation during the day: The graph shows an irradiation curve featuring a double-peak structure: a peak in the morning and a peak in the evening. This unusual irradiation pattern results in a different energy output profile of the installation, compared to conventional solar energy systems. 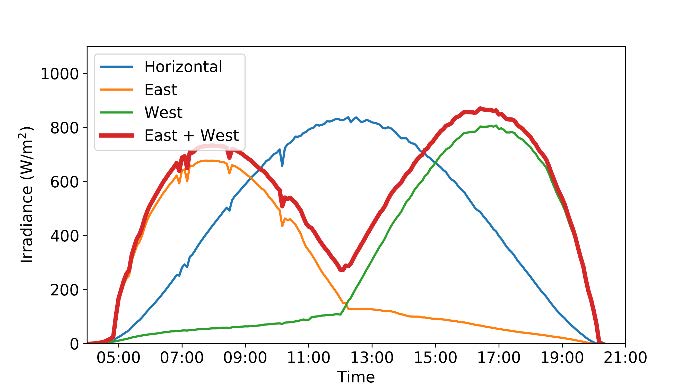 After construction, TNO carefully measured the yield for a year and a half. In the first year, 203 MWh (203 thousand kWh) was generated. That is enough to provide approximately 67 households with electricity for a year. It can also provide energy to drive 1 million km with an electric car, or power 14 km of highway lights for a year.

If all noise barriers along roads in the Netherlands are built as Solar Highways solar noise barrier, an estimated 250 thousand households can be supplied with sustainable electricity. The graph below shows the monthly yield of the installation in the first 18 months that the screen was in use. Much less energy is generated in the winter months than in the summer months. This is also the case with ordinary solar panels, but with this vertical arrangement the difference is even more pronounced. Altogether, the yield for this double-sided installation, oriented to the east and west, per installed capacity is comparable to an installation that faces south.

Higher yield due to a light environment

Solar panels not only convert direct sunlight (① in the figure) into electricity, so-called diffuse light (② to ⑤) also contributes to energy production. Diffuse or indirect light is the light that does not come directly from the sun, but is first reflected from, for example, clouds or a surface on the ground, such as grass or buildings. When the surroundings of the installation are light-coloured, more reflected light will reach the solar panels. To investigate the effect of the surroundings, we covered the slope of a part of the barrier with light-gray tiles. These tiles reflect about 50% of the light, while grass only reflects roughly 25% of the light.

Measurements show that the yield was increased by 3% to 5% for this part by placing a light-coloured background behind it. This effect can be further enhanced by installing a light-colored embankment cover on both sides of the barrier. In this way, more sustainable energy can be generated using the very same solar panels! 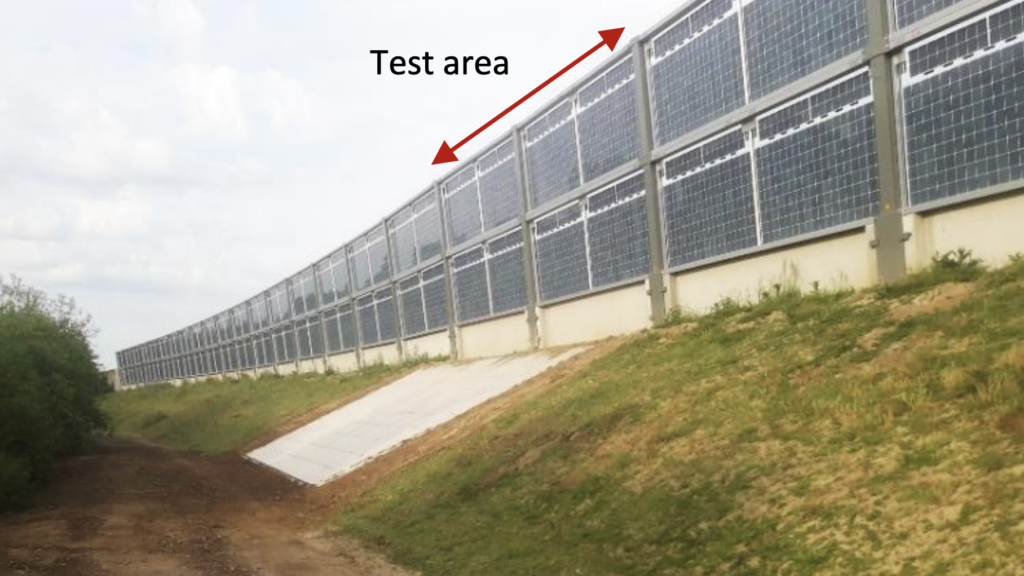 For road authorities it is crucial to gain knowledge about the additional costs and work needed for operating a solar noise barrier, compared to a conventional one. Especially the costs for cleaning are uncertain. In order to gain more insight into this aspect, within the project we have investigated whether cleaning the solar panels in the noise barrier is useful. To investigate this, we have divided the installation into different sections. Five identical sections of the noise barrier, the so-called test areas, were subjected to a different cleaning regime. For some sections we cleaned only the quiet side, for some sections only the road side, and for others both sides or none of the sides. Also the cleaning frequency differered: certain areas were cleaned once a year, while other areas were cleaned twice a year. By comparing the electricity output of the different surfaces, we were able to determine whether the different cleaning methods resulted in more energy output, and how much.

The different cleaning regimes did not show a measurable difference in yield. Therefore, from the point of view of energy yield, it is not necessary to clean the noise barrier. Obviously, there may be other reasons for cleaning the barrier so that it always looks shiny!

Noise barriers are often a place where graffiti is sprayed. If this happens on the parts of the screen with solar cells, it will not only look messy, but it will also lead to less renewable energy output. Fortunately, we saw little graffiti on the Solar Highways screen, or it was limited to areas where there are no solar cells, such as the concrete plinth. On one occasion we found graffiti on the solar panels, but this was quickly removed.

Another risk is vandalism. Unfortunately, attempts have been made to damage the barrier by throwing objects at it. This has led to a number of broken glass plates. Research has shown that this does lead to a dangerous situation. Also, it did not lead to a lower energy yield. 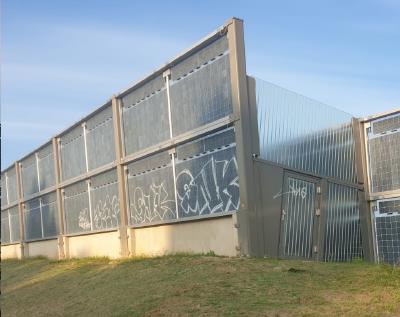 Investing in a sustainable future